The road to the Emerald City.

Today is the day we get a rare glimpse into the future. From this day forth, we will begin to make-up lists, create a plan of attack and revise our projected outlook for Memorial Day weekend.

Today is the day the line-up for Sasquatch! 2011 is announced.

Mitchell Black and I have been given the green light to cover the Sasquatch! line-up release party down at the Showbox in Seattle. We will partake in the celebrations and report back to EVOLUTION 107.9 with up-to-date news on what’s going on at the release party.

Here’s what we know: the Thermals, Das Racist and Mad Rad will perform at the party and comedian Todd Barry will host the event.

The big question of the day is whether or not there will be any surprises at the launch party. GuerrillaCandy.com has pieced together evidence to produce a conspiracy-theory style rumour that the Foo Fighters might play at the Showbox tonight.

Here is their logic from a post on February 4:

Foo Fighters have said via Twitter that they are going to stage a series of surprise shows prior to the release of their album on April 12 and recently played a secret show in L.A. where they debuted the new record.If you tune

the Foo Fighters radio station that teases songs from the new album you hear a DJ on station 108.8 “The X” hint about a secret Foo Fighters show. Is 108.8 The X a clever Dave Grohl nod to Seattle’s 107.7 The End?

Last night on the Foo Fighters Twitter account there was a picture of the band hanging with Lemmy from Motorhead, who is playing a show in Seattle tonight. It’s not too far of a stretch to assume that picture was taking in Seattle. Of course, that picture could also have been taken a few days, weeks or months ago.

To tell you the truth, I don’t know what this means. Is it someone looking too closely at the facts laid before us or could this hypothesis be legit?

Either way, Mitchell and I are embarking on the first leg of our Sasquatch! media frenzy.

Alas, we take for the Emerald City before night-fall.

Stay tuned for more news early in the ‘morrow.

Sasquatch! is coming quickly and there’s not much time until colleague Mitchell Black and I embark upon an important mission to acquire media passes to cover the main event.

Black is an impressive writer with a renowned taste in music and I have a sharp eye for imagery with a quick trigger finger.

From bands to life in the camps, we will experience and cover the great wonder that is Sasquatch! Music Festival.

This is the tenth year of the music festival and fans are expecting it to be the most impressive show to date.  Already, we have seen a fourth day of music added to the weekend but so far The Foo Fighters is the only band to be confirmed as a headliner.

Edward Sharpe and the Magnetic Zeros at Sasquatch! 2010.

Sasquatch! Music Festival 2011 reports that Wolf Parade and Das Racist are also booked to preform during the Memorial Day weekend. The website has also released a list of bands rumoured to play at the festival. Chromeo, Cold War Kids and the Arcade Fire are speculated to be just a couple of the bands slated to rock the Gorge.

According to the Seattle Weekly, the festival’s line up is set to be released February 6 during a Sasquatch! Launch Party at The Showbox in Seattle but there is no information regarding the event on the venue’s website.

Maybe these photos will appease your anxiousness. 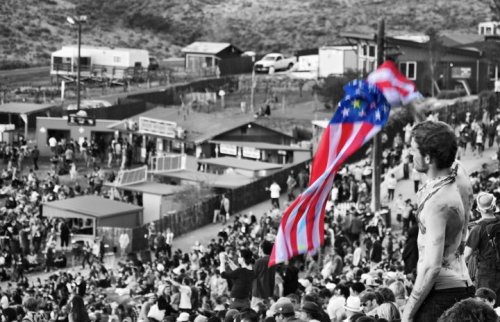